Okay, it’s not what you think. After selling my motorcycle we decided to invest in a lawn tractor. Meet the new ride!   This is sure going to make mowing our 3/4 acre a whole lot easier.   Here’s a little clip of my son mowing. No helmet needed! Thank you for stopping by today! I am still looking for female motorcyclists to profile. Please leave a comment and I’ll get in contact with you.  Enjoy the ride!

Posted in Cub Cadet, Me, Riding

Yesterday coming home from work I took a more covered route because of the wind. A little too gusty for two-wheels! There’s only one open stretch on the road I took and almost lost it twice. I’m guessing many of you have experienced that type of wind. The sudden burst of wind that hits from the side and you feel your bike being pushed out from under you. Yup. That was the kind of wind we had here.

A little farther down the road I ended up in a residential area with a lot of cover so I knew the wind wouldn’t be such a hazardous factor.  But, there was another hazard that was new to me. Road snakes. It’s not what you think. Road snakes are that toilet paper tar road crack filler used around these parts! They look innocent enough, but if you hit them at the right angle on two wheels they can be rather slippery!

Well, I had my first encounter with some fresh ones shortly after getting out of the wind! There were many of these road snakes running parallel with me and I could feel the motorcycle wobble a little. Yikes! Kept everything upright. Big win!

What is that stuff? Looks like toilet paper and tar!

These photos are from today and not the ones I encountered yesterday, but you get the idea. Do you have road snakes by you?

If you find Spring can you send me some?

It’s Spring. Well it is suppose to be Spring. This is what it’s looked like this past week.

It all started Thursday while I was at work. 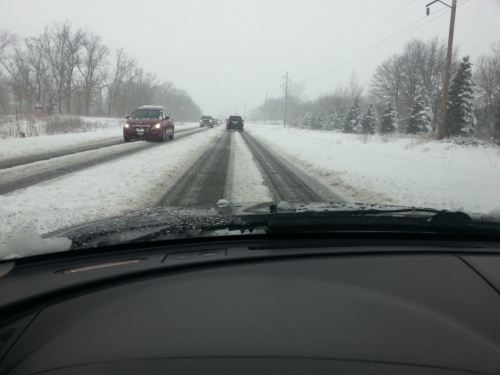 This was my commute home.

When I arrived home my neighbor was outside with his 2 1/2 year old making a snow man.

And when I woke up on Friday there was more snow! 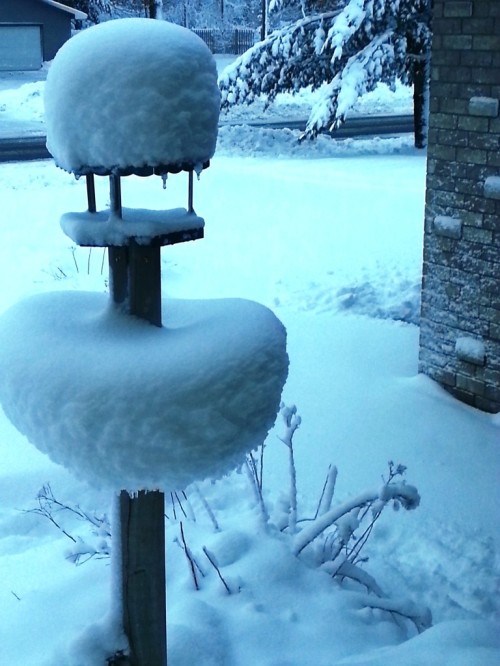 The poor Robins are so confused. I think I want to go to the bait shop and buy some worms for them.

I so miss riding my motorcycle.  Here’s to hoping the weather warms soon!

I’m hankering for a ride. The weather will eventually catch-up to my dreams and I’ll be on two wheels again. In the meantime y’all who are riding enjoy!

Just reminding myself the snow is coming soon!

Living in Minnesota it is only a matter of time before the snow flies. Some creative person created this Snow Rider and is a good reminder the snow will come, but it is followed by Spring!

Ha-ha! My image of a scooterist has just been changed! Check out this modified Vespa the French, circa 1956, 1959.

Take a look at this gorgeous candy red 50 cc Vespa!

My favorite son-in-law picked up a Vespa this past year. A real beauty in candy red! And guess who was able to ride a scooter for the first time ever … ME!!

My first scooter ride on the Vespa!

This vaycay just keeps getting better and better! 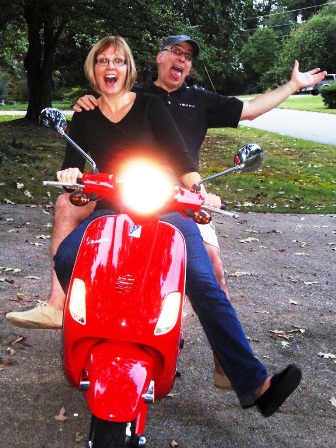 Taking hubby for a ride!

Another New Experience, Make that Two

Happy day! Hubby was off this past weekend. It only happens (mostly) every other weekend. We usually try to pack a lot into those days off together. This past weekend was no different. We knew that Sunday we were having a friend over so that meant Saturday would be our riding day.

We woke to chilly temperatures so we waited until 11 a.m. to head out. Hubby is the navigator – trust me you’d never want to follow me because I get lost in the parking lot! But I digress … we headed out on a new route to our favorite lunch spot, Romayne’s in Taylor Falls.

It started out as a lovely ride. The sun was out, the roads were clear, and the bike was running great! We were about 10 minutes into the ride when I began to notice the wind. I was thinking it was because we were out riding in some open areas, but the further we rode I realized we were riding in some pretty strong wind.

I was never so happy to see the sign welcoming us to Taylor Falls! We parked the bikes and off to lunch we went. After a leisurely lunch we headed home. In town the wind didn’t seem so bad. I was hoping it was dying down, but that was wishful thinking. Not a mile or two out of town I could feel the blast of wind.

It was the strangest wind ever. It came after us in all directions! The cross wind would cause me to feel like I was leaning into a turn on a straight away and then it would suddenly shift to other direction. Talk about needing to be focused while riding.

I’d like to stop and thank the many unknown vehicle drivers around me. There were a few that crept up my backside, but for the most part they had my six and gave me space. One guy in a Cadillac passed us, in my opinion, rather recklessly. Again, he was the exception not the rule. I’m guessing from the rear you could tell I was being tossed around.

Back to the wind. One of our first rides out this year we face some pretty stiff wind, but it was constant and from one direction. The wind we faced Saturday was incredibly shifty and strong. We never seemed to get it to our backs, ever!

When we arrived home I checked the weather and we were experiencing 20 – 25 mph winds. Yup, I concur strong winds. Well chalk that ride up to a new experience. I was very thankful to arrive home safe and sound.

We were planning on heading out again to church since the winds seemed to be calming down. I was pulling my VStrom out of the garage when I lost my footing and fell over. Yes. I kept the motorcycle upright in the 20+ mph winds, but couldn’t back it out onto the driveway. (Why don’t motorcycles have reverse?) Crunch went the left turn signal.

A small bruise on my knee, a $63 replacement part, and an ego that is crushed about sums up the situation as hubby rescued me and the fallen motorcycle. Church will wait until tomorrow morning as hubs is putting the pieces together again.

P.S. We did ride Sunday to church with no incidences and winds were clocked at 3 mph.

Helmet or Heels: I'm comfortable in either!
Blog at WordPress.com.