Profile of a Female Motorcyclist: Meet Princess Scooterpie a.k.a. Darlene

I’ve been on Twitter for a couple of years and have met some wonderful people. Darlene or @Moto_Diva is one of them! Dar is a kind woman. She is from Vancouver Island, BC Canada and has written about her journey on her blog Princess Scooterpie! I’m so excited to be able to share her story today. Please warmly welcome my friend Dar!

How long have you been riding a motorcycle? I have been riding on the back of my hubby’s motorcycle since 1983 which is about 28 years, I was very content with that for several years. I often thought about getting a motorcycle license, but held back because we had a young daughter and I just wasn’t ready to take that step. In January 2011 I ventured into two wheel territory with a 50cc Yamaha Vino scooter who was affectionately dubbed ‘Vixen’. My first experience on two wheels was not a great one, I am a little embarrassed to say, but I dumped a brand new demo scooter on a test drive. Oops! My first name is Dar but my second and third names are Persistence and Perseverance, I got back up and finished the test ride in spite of being hurt and bought a scooter on January 23rd, 2011. I have been riding for about 15 months officially.

How did I learn to ride? This is actually a 2 part answer for me. My hubby is the most patient man I know. He took me to a parking lot countless weekends and evenings and showed me how to ride the little scooter. I also read everything I could get my hands on and brushed up on the rules of the road. He had me doing figures 8’s, circles, quick stops, turns, u-turns and would scare the bejeebers out of me when he pretended he was a rogue pedestrian stepping out into traffic completely oblivious to the blue streak of scooter terror coming their way! I almost knocked him flat.

Months later I decided I needed more cc’s under me and went and wrote the British Columbia learner’s license test, I passed!! That was in August. After that I enrolled in Vancouver Island Safety Council’s Novice course and Traffic course, I could hardly wait because that was in October. It was an excellent experience and I realized there were several skills that I was lacking as a “scooterist” and these could have been potentially dangerous in traffic situations. The course is very intensive, the novice course had 8 hours of classroom theory and 12 hours of practical riding in a closed course. This was amazing! I learned how to shift, balance, do maneuvers, it was so exciting and also a little overwhelming at times. I was so impressed with the instructors they took all of us newbies and created motorcyclists! I passed my motorcycle skills assessment test and continued onto the Traffic 2 day course, it was thrilling taking all of the skills and putting them together and using them in real world scenarios. My road test was 2 days later on October 19th at 9:30am. I passed and officially became a fully fledged motorcyclist, I was ecstatic!

In retrospect I wish I had taken the motorcycle course before I even sat on the scooter, because I would have been better prepared and I would have truly understood the importance of the ATGATT Philosphy – All The Gear All The Time. This is something I always practice no matter what the temperature; I would rather sweat than bleed.

What was my first motorcycle? My first two wheeled love was my Yamaha Vino 50cc scooter – Vixen. My first real motorcycle was a 1984 Honda CM450e – Lucy.

How many have you owned? In the last year and a half I have had three bikes. My Yammy Scooter, Honda CM450e and at Christmas my hub and daughter gave me a vintage 1985 Honda Shadow VT500c. Wow!

Why did you want to ride a motorcycle? For me it was a commuting issue, there was no parking at my work, so I took to two wheels. I am not one to run on someone else’ time table, so the bus doesn’t work for me. It quickly became a passion and I wanted more! Once I got a taste of what it was like sitting at the front of the bike, I realized I was missing so much and I wanted to be in charge. I don’t think my husband realized what sort of Pandora’s motorcycle box he opened! My family became moto orphans, thankfully they indulged and encouraged me on this journey.

Tell us about your riding. I am a daily bike commuter and ride year round in all kinds of weather.  Cold, rain, sun, fog, you name it I’ve ridden in it all. I wear a textile 4 season jacket and motorcycle pants, boots and gloves, once you are geared up and figure out the layering thing, it is surprising how comfortable you can be.  I have to say though I am really loving the warm weather, it makes up for riding in all the ick of winter.  I also ride for pleasure and usually meet up with a friend and we go tootling around Victoria and area.  My hub and I ride, but I tease him because he doesn’t ride in cold weather – I lovingly call him a ‘fair weather road princess’.  I am hoping to take some moto vacations and could love to go down the Pacific coast, travel across Canada and motorcycle across Europe.  Lots on the moto to do list for me.

Do you belong to any motorcycle groups? I belong to a few online groups: Scooter  Diva, Two Wheel Females and my VISC alumni riding group from our riding school.  I am also one of the founding members of Rider’s for Safety onVancouver Island, we came together after several head-on collisions in which motorcyclists were killed. We lobbied our Government to change the Trans Canada Highway 1 Malahat, we partnered with other stakeholders and the emergency responders to get barriers installed in the high incident traffic areas on the Hat. It culminated in an organized ride where we had less than 1 week and amazingly rallied 300 motorcyclists to come out and support our cause. It was breathtaking to see motorcyclists from across the entire community. We were successful and a traffic study was done and concrete medians and other safety measures are being implemented this summer. I also decided to start a blog and share my experiences, it is fun and I have met up with a few of my fellow moto bloggers.

What advice do you have for women who ride or want to ride a motorcycle? I think my most important advice would be to take a Novice riding course and Traffic Course from a reputable school.  This gives you an opportunity to discover motorcycling in a safe environment and you are learning skills properly right from the get go. You also learn about the importance of wearing safety gear from head to toe, you only get one chance to do it right in traffic, so I practice ATGATT every time I am out on the bike. I can not stress this enough, it is important. I am committed to keep learning and am planning to take a motorcycle instructor course in 2 years, one of the requirements for this is 3 years riding experience. Riding has given me so much already in the past year, new friends, a sense freedom and adventure. Get out there and ride!

What is the longest trip that you’ve taken on your motorcycle? The longest I have gone is about 200 kilometers (124.27 miles), but that is mostly because I started late in the season and was limited by winter conditions. I have put about 2,500 kilometers on my bike since I licensed it in February of this year, in the space of two months. I ride my bike everywhere!

Do you have a favorite riding story? I think my favorite moment was when I had finished my motorcycle courses and went out for my first real ride with my hubby. We rode out into the rural part of the island and he led me down twisties! OMG it was amazing, and I was hooked from that moment on. I came around the last corner and down a hill and there was campfire smoke in the air and I rode through the haze. I pulled off at the bottom and there was a lady on a bicycle chilling by the water, she came over to me and said, “I heard your bike and looked up and I  saw you in all your pink gloriousness coming out of the smoke.” At the time I had a pink and black riding jacket. It was pretty sweet! The best part of the day was when over lunch my hubs who has been riding for 30+ years learned over to me and said, “Welcome to the club.” I actually felt like a real motorcyclist then and not a poser. I have come a long way in 15 months and never dreamed that I would be riding a motorcycle every day! It has quickly become and an obsession and addiction. I love it!

What do you do when you are not riding? I love to cook with my daughter and a bit of a foodie. I love getting together with friends over a good meal and sharing a good glass of wine. I love outdoor activities fly double string stunt kites, camping, and kayaking. I am also an avid beader and love to make jewelry. 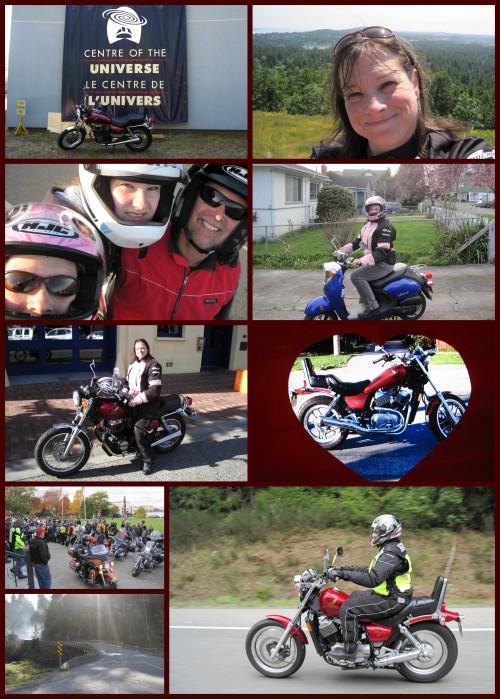 11 responses to “Profile of a Female Motorcyclist: Meet Princess Scooterpie a.k.a. Darlene”